You’re the proud possessor of a gorgeous new property. To make sure your new asset is looked after properly, you decide to join the executive committee, ready to roll up your sleeves and get to work.

All’s well until the basement floods. Do you call a plumber to check for burst pipes? Or is last night’s storm to blame? You ring a few trades, but none can diagnose the problem without coming out. And charging a call-out fee.

Oh, and they can’t guarantee what time they’ll arrive, so you’ll have to take the day off work.

While joining an executive committee can be very satisfying, dealing with trades can be costly and time consuming. Worse still, if something goes wrong it could have some very serious ramifications.
Craig Gavin, General Manager of Laing+Simmons Facilities Management, and his team clock more than 25,000 hours per annum servicing the ACT strata community. They work with trades on everything from minor repairs to major issues. He helps us dissect the three biggest challenges executive committees face when dealing with trades.

1. Individual tradespeople can be expensive

There are several reasons why dealing directly with trades can cost executive committees more than they’d bargained for.

Firstly is the old adage that prevention is better than cure.

It’s crucial that a building complex has a schedule for planned preventative maintenance. This includes plant or equipment repair or replacement and periodic tasks that keep the complex running smoothly. If simple things get overlooked, bigger problems occur. Unfortunately, individual tradespeople don’t have this kind of wholistic view of your building and are rarely called out until a problem happens.

Craig uses gutter maintenance as an example. “We recommend that gutters and downpipes are attended to every six to 12 months depending on whether it’s a leafy area. If they aren’t, they fill up with debris. In a major rain event, the water has nowhere to go and flows back into the roof space. All of a sudden you have major internal damage to the roof beams and probably some electrical work. Worst of all, because the damage stems from the executive committee not doing their due diligence, it won’t be covered by insurance and the committee will be on the hook for the cost”.

Secondly, even if you do get to an issue early, it’s often difficult to establish what the problem actually is. Get it wrong and you risk being on the hook for two or more call-out fees.

Craig remembers a recent instance where a complex experienced serious leakage, with water gushing through the roof. “It happened to be a rainy day,” he says, “so the executive committee made arrangements to call out a roofing specialist. But they also asked us to have a look and give them some advice. We quickly discovered the real issue: some of the seals in the hot water system had burst and needed fixing. It was an easy fix by a plumber, whereas a roofer would have cost a fortune and not actually solved the problem”. 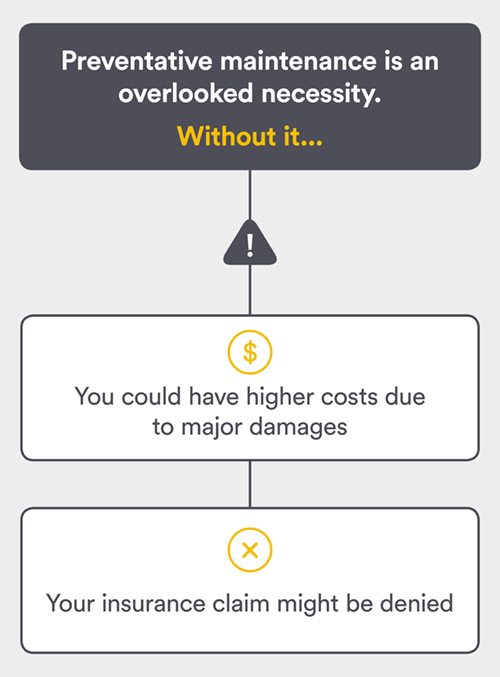 2. Waiting around is frustrating and time consuming

Anyone who’s ever called an electrician or a plumber knows the pain of waiting for trades. Most trades will only give you a window of time, so you can be waiting around for a long while before they turn up. And if the repair can’t be done on the spot, you’re looking at a second time slot. Add in the requirement to get three quotes, and the whole process can take hours and hours—all for a ten-minute repair.

For executive committee members, this part of the role can become a serious headache unless there’s a facilities manager on site.

“Facilities management acts as a superintendent for the executive committee”, explains Craig. “We keep a list of preferred contractors, whose services we know are good and whose prices are reasonable. Because we’re on the ground and we have a good understanding of the issues involved, we can establish the scope of the job quickly and ascertain if the original quote is reasonable. For that reason, we don’t usually need to get multiple quotes except in unusual circumstances where we may recommend that the job be put out to tender.”

A facilities manager will not only liaise with trades on your behalf and be present to let them in, they’ll also develop ongoing relationships that streamline the process. Many trades also prefer dealing with facilities managers, because they have the experience and resources to explain the problem clearly and manage realistic expectations on both sides. The best tradespeople can pick and choose their clients, and will be attracted to working with facilities professionals. 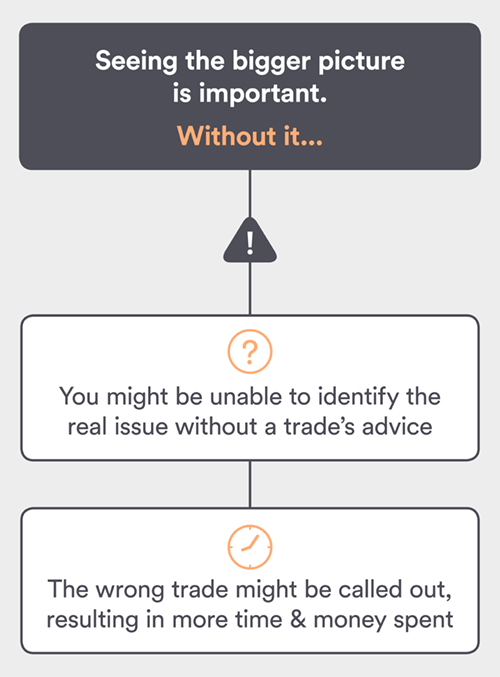 3. Liability issues can put the executive committee at risk

There are a huge number of compliance issues to be aware of in a development, some of them with steep penalties if they’re not met. Keeping abreast of them is difficult and tedious. Let’s face it, the Building Code of Australia is nobody’s preferred bedtime reading—unless you suffer from insomnia.

One example is fire safety. “Multi-rise buildings must have fire stairs, which are isolated stairwells intended to act as safe spaces in the event of a fire”, Craig explains. “The doors must self-close and be compliant with fire regulations. Handles and locks must also abide by these regulations. If a trade comes in to do work on the building and chocks open the doors, you’re suddenly in breach of the code. If a fire occurs, insurance may not pay out and the executive committee can find themselves expected to cover the costs.”

Executive committees must also ensure that any trades are working in compliance with health and safety regulations. Contractors working on a roof, for example, must have compliant harnesses, and the roof must have useable anchors for them to attach to. If either of these aren’t present and someone falls and injures themselves, it’s the executive committee who may be liable.

"People don’t understand the legislation”, says Craig. “They often feel things aren’t necessary or are too costly. Mandatory compliance is required under the Australian Standards. If something does happen, the executive committee can be liable. It’s a real worry for them.”

Relying on individual trades presents some clear challenges. Sometime a committee decides that DIY is the best way to go. Why not? Money saved is a good thing, right?

Cue the groans of tradespeople everywhere. While a facilities manager has the training and experience to attend to small jobs themselves—such as patching a wall or fixing some broken tiles—there are some things that should be left to the professionals.

“One building wanted to put some bike racks in. We presented quotes for the work, which included a concrete slab. Against our advice, the executive committee decided instead to do the work themselves and save some money. They bought bike racks from Aldi and started to install the concrete slab—drilling straight through some service connections they didn’t know were buried underground. It was a nasty surprise. Luckily nobody was injured, but the attempt to save a few hundred dollars instead cost them several thousand as they had to pay to excavate the concrete and reconnect the services. It was an expensive lesson.” 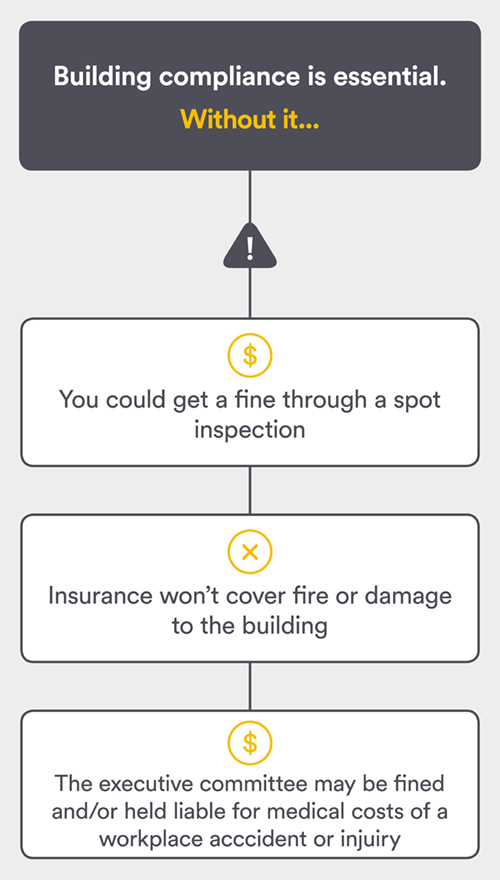 The case for professional facilities management

Compared to a residential house, a building complex is a complicated beast, with hidden services and large communal systems holding it all together. A facilities manager can help demystify the process. “We’re building consultants,” says Craig. “We deal with the building on a day-to-day basis and know it back to front. We can give the executive committee information on things they must comply with as well as advice and recommendations on the upkeep of the property to increase longevity and avoid disasters.” 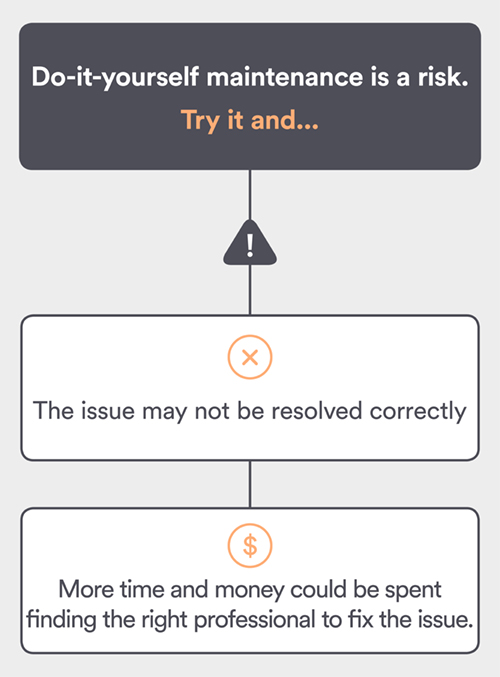